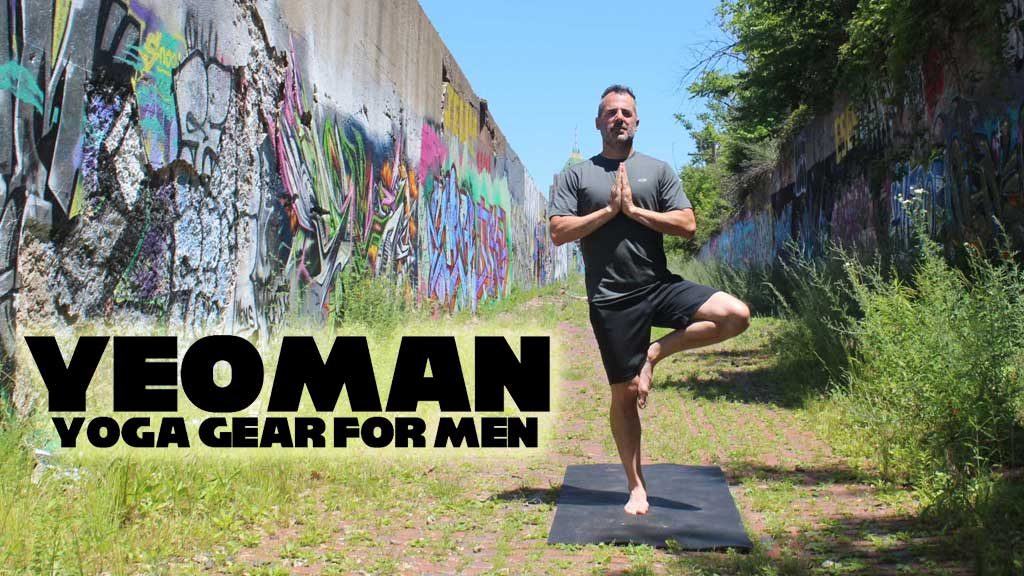 You can now buy Yeoman Gear at Amazon.com.  It is even available through Prime Shipping if you are a Prime Member.  Here are some links:

Our Yeoman Gear Yoga Strap – Which fits extra-large yoga mats like ours:
https://www.amazon.com/dp/B01MTQP71J

We are very pleased to offer ordering and fulfillment through Amazon.  It allows everyone to get their gear efficiently.  Their shipping prices are really fair and we keep the products in stock so that they ship to you quickly.

Yeoman Gear was a big success on Kickstarter.  Our project raised thousands of dollars and showed us that people really do want larger sized yoga gear. Also, people that wanted larger yoga gear were willing to get out their wallets and buy it.

Yesterday, we shipped all of those orders.  We are really happy to reward early backers with their merchandise and we did it on time.

Very soon you will be able to buy Yeoman Gear online.  Stay tuned for that. 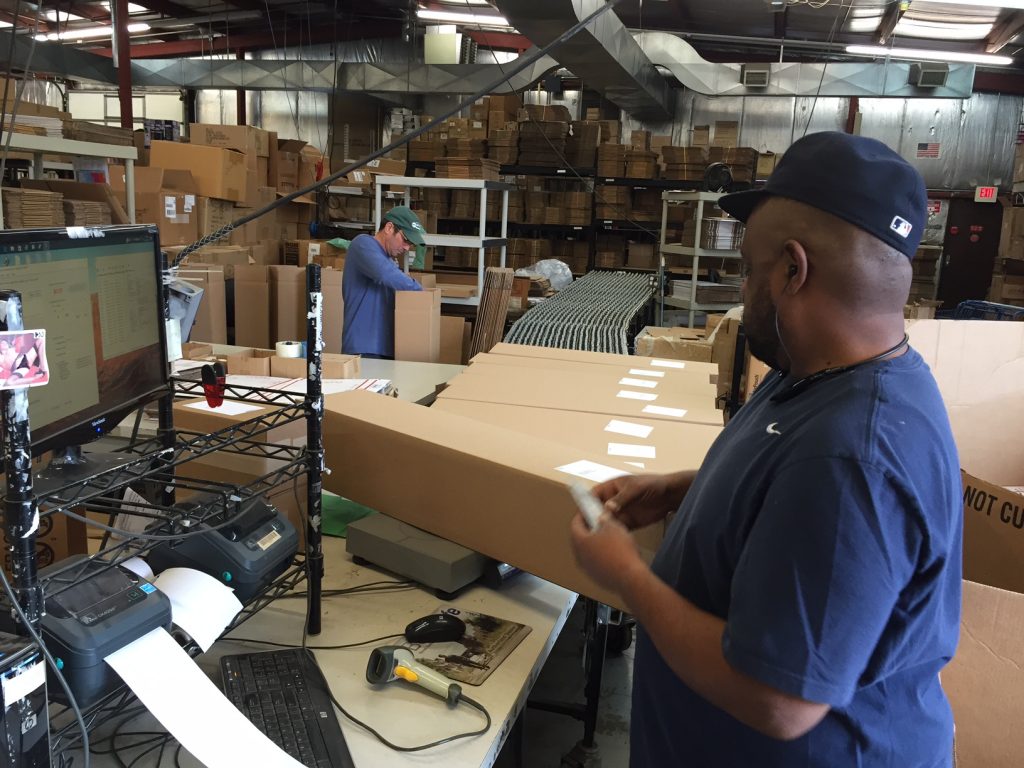 Yeoman Gear is almost here.  Our products are finished and are on a boat to our warehouse.  We expect to ship our pre-orders in mid-November.  After the pre-orders are shipped you will be able to buy Yeoman Gear mats, blocks, and straps at Amazon.com.  Exciting stuff.

Click Here to be forwarded to our Kickstarter Project where you can pre-order Yeoman Gear products.

Our Kickstarter project is live.  You can finally pre-order Yeoman Gear products.  These are yoga products that are wide, long, and thick enough for men at fair prices.  Click Here to be forwarded to our project page.

While creating the draft of our Kickstarter campaign, we realized it looked a little bland, so we jumped the truck, drove downtown, and shot some cool photos.  Here are the best ones.

This is the title photo for the Yeoman Gear Kickstarter Campaign. 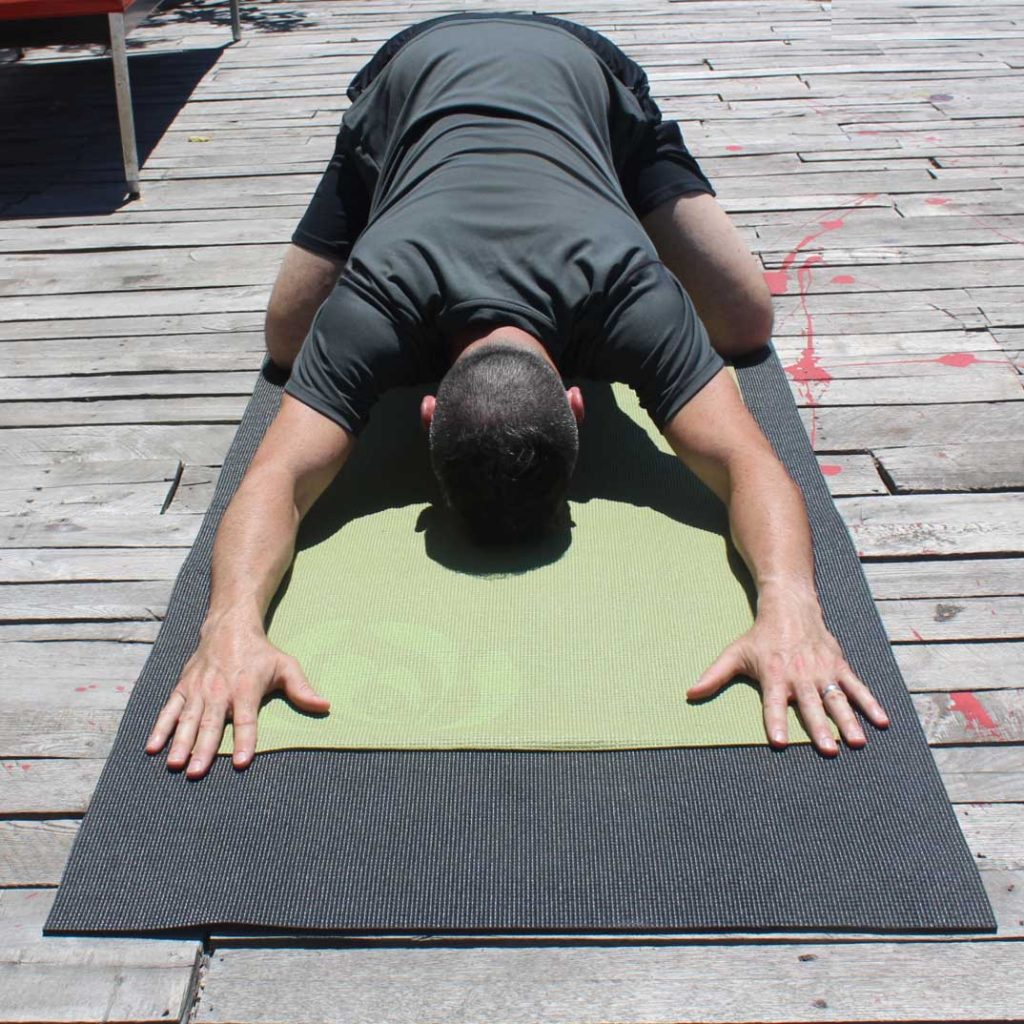 This pose shows the size difference between a standard yoga mat (green) and the Yeoman Gear Yoga Mat (black). Not that my hands and knees are still on top of the black mat. 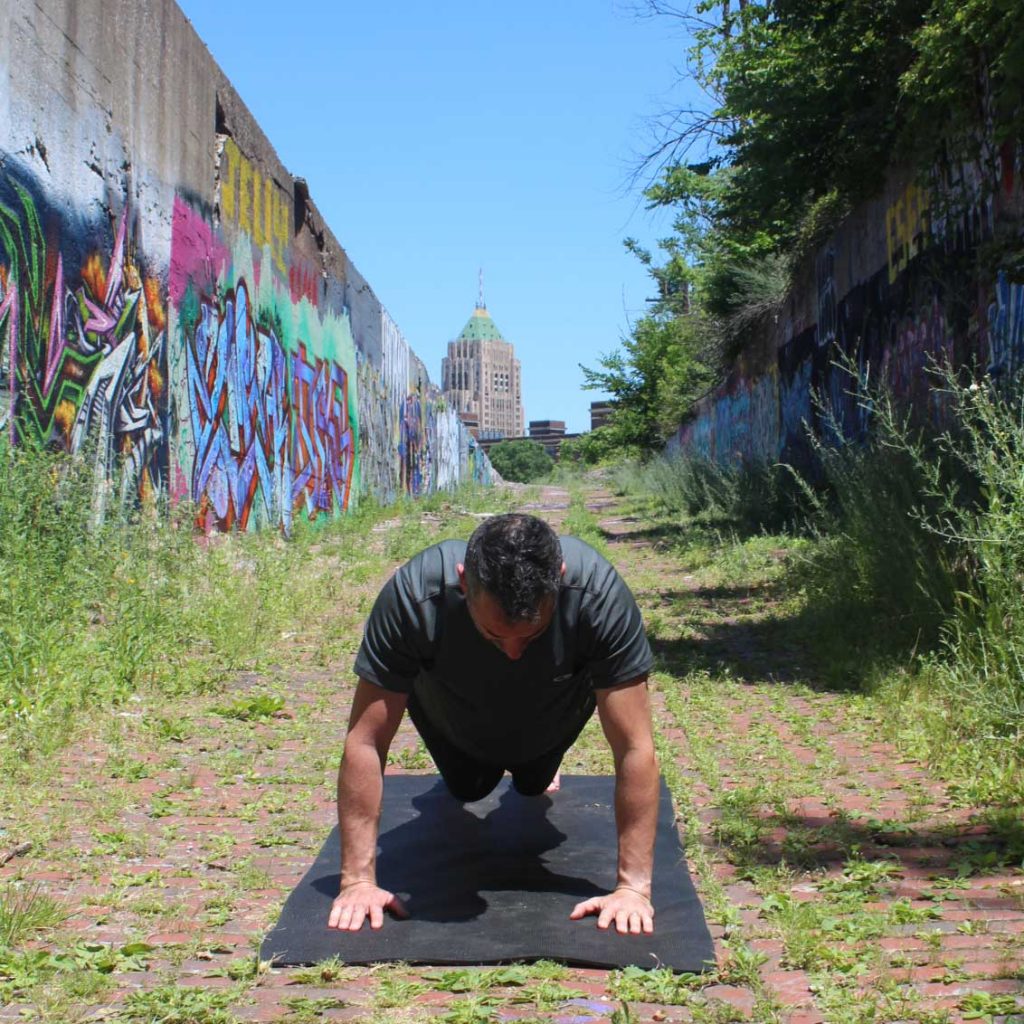 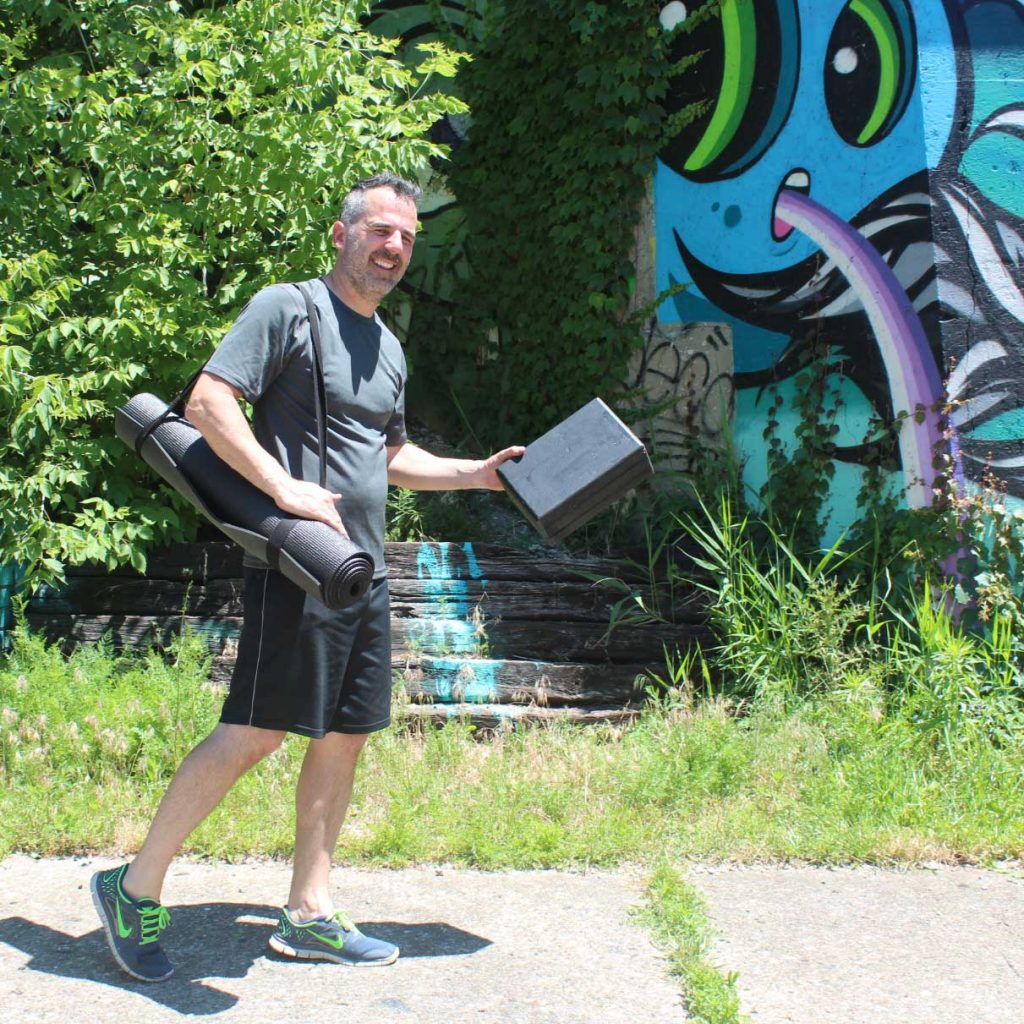 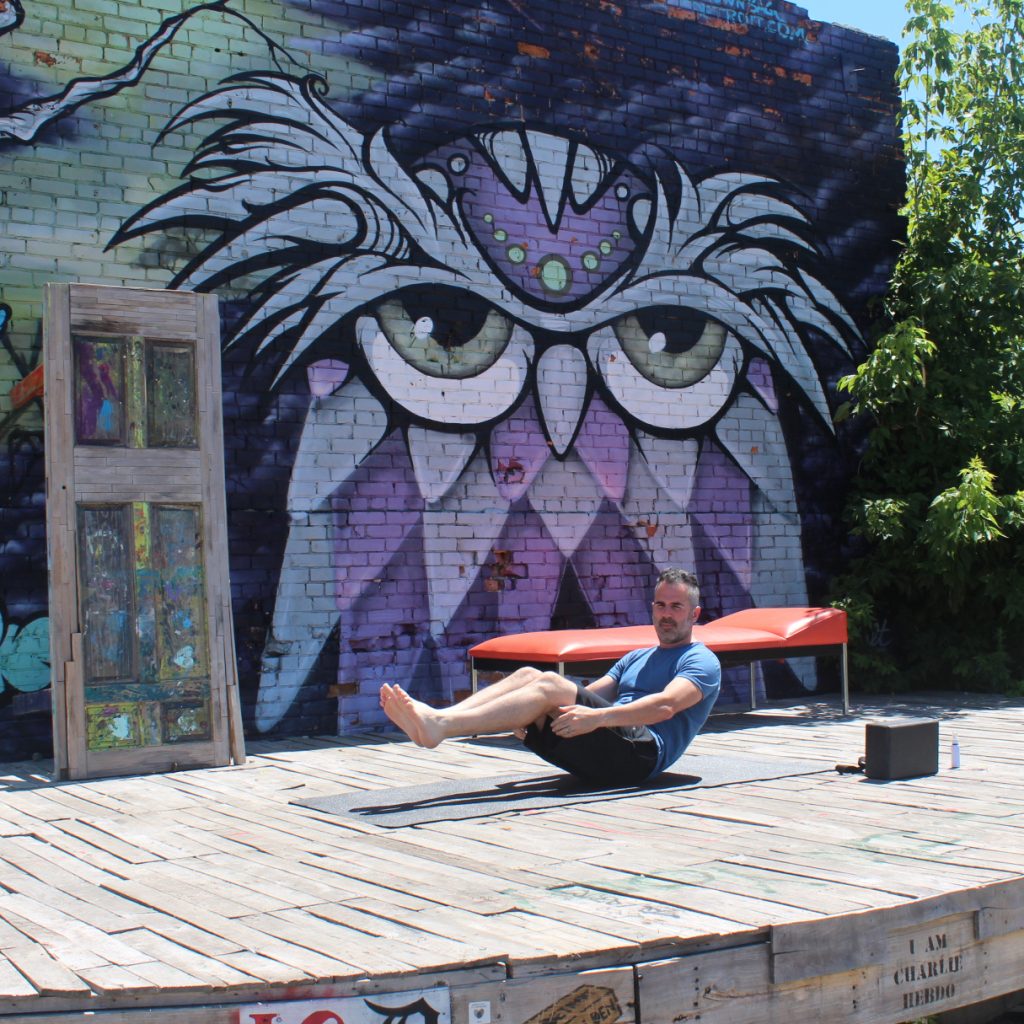 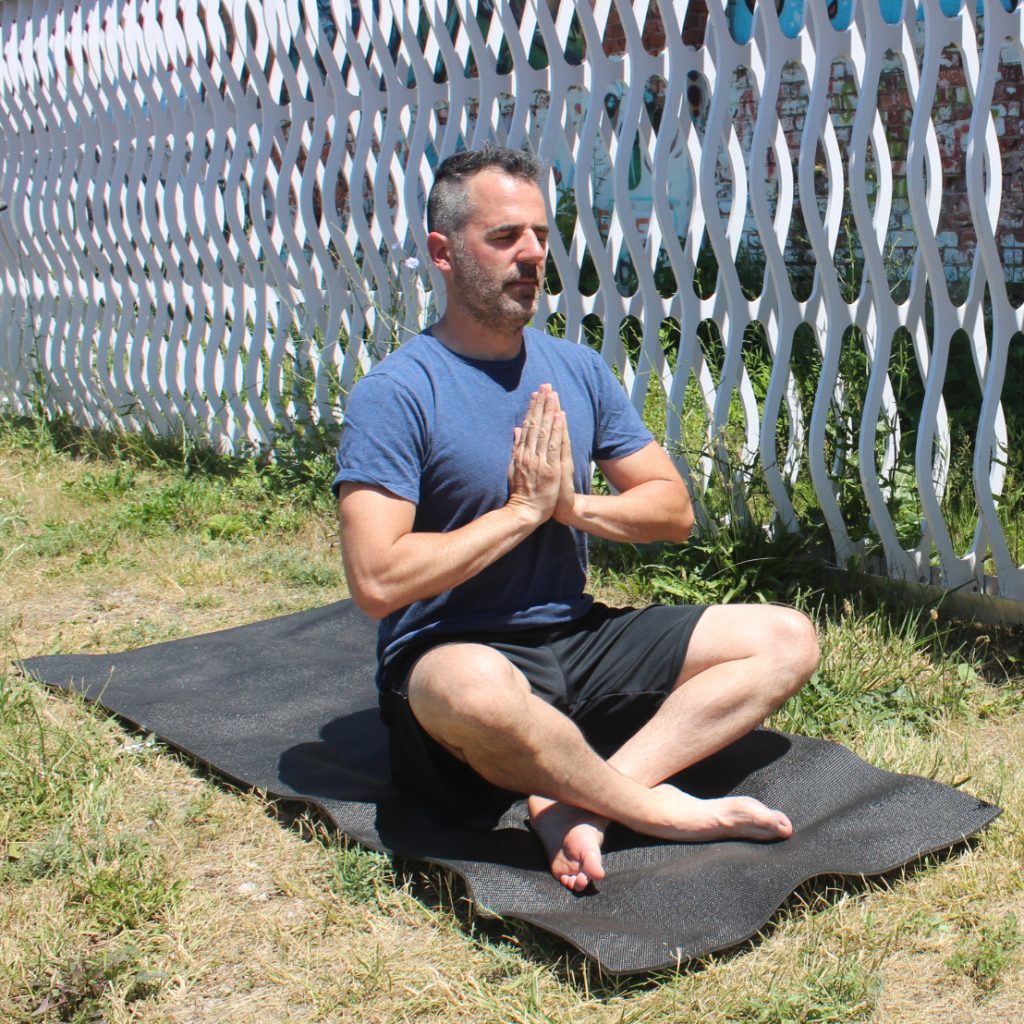 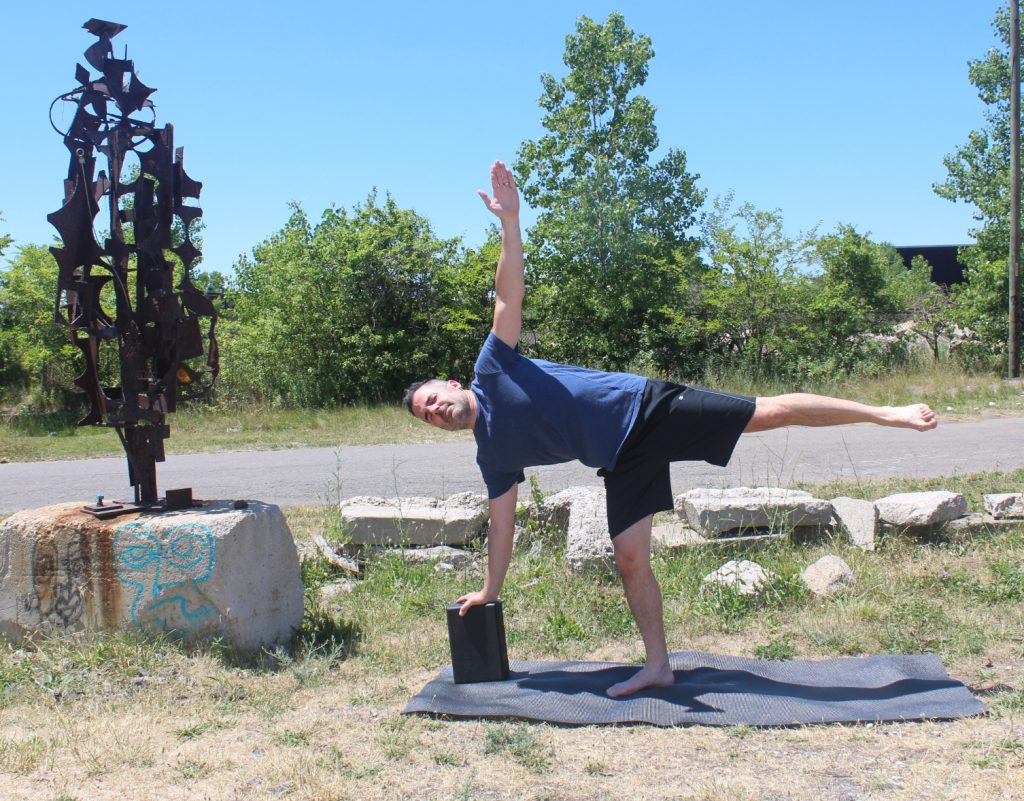 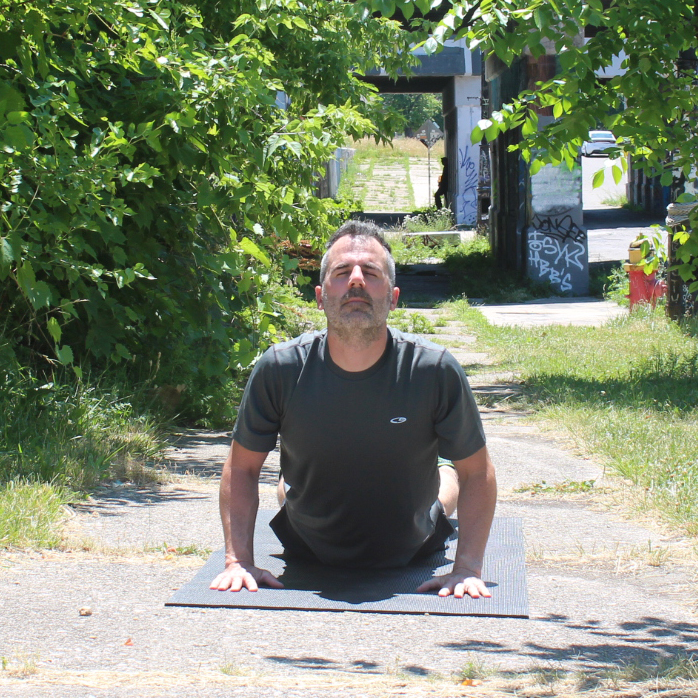 June 23rd, Troy, Michigan – For Immediate Release – The latest Yoga in America Study shows that 17% of yoga practitioners in the USA are men, so why is all of the yoga gear on the market too small for them?  A new company, called Yeoman Gear is tackling issues that apply to these guys.

Yeoman Gear conducted their own survey of male yogis and found that over 90% felt that yoga mats were too small and more than 95% of the men surveyed agreed that yoga blocks were not large enough.

“That made the decision to launch Yeoman Gear really easy.” says founder Tom Nardone.  He has been practicing yoga for over 15 years and always thought the products weren’t made for him.  It wasn’t just the pink and purple pastel tones, it was the size of the items.

“A small mat and a large yogi leads to a lot of readjustment during class.  It can ruin your flow.  I was jealous of the smaller people who didn’t have to shuffle around as often.” says Nardone.  Yeoman Gear gives larger people more space to work with.  The mats are described as one head’s length longer, one hand’s width wider, and twice as thick.  The Yeoman Gear Block is more than twice the volume of a standard yoga block.

Will a larger yoga equipment fit in a crowded classroom?  Yes. Yeoman Gear is just slightly larger and sized proportionately to larger people.  Early users of the mats say that their neighbors didn’t seem to notice the difference.

What about price?  Is this larger yoga gear much more expensive?  The Yeoman Gear Mat is just $39 when you pre-order via Kickstarter. Add in the block for $15 more.  A deluxe package of Yeoman Gear which includes the mat, block, a yoga mat carrying strap, and mat cleaner spray is only $69.  Compared to premium yoga equipment, Yeoman Gear is a relative bargain, especially for men (and people who are not tiny).

When asked if Yeoman Gear could be used by women, the company responded positively.  The focus on a male customer is primarily a way to target people who practice yoga and are of larger stature.  “Of course there is nothing inherently related to gender about our products, we are just marketing the product to men, who on average are taller and heavier than women.”

The name Yeoman is two things.  First, a Yeoman was a person who worked hard and was loyal.  Second, it is a play on words.  The yo from yoga and man combine for Yeoman. 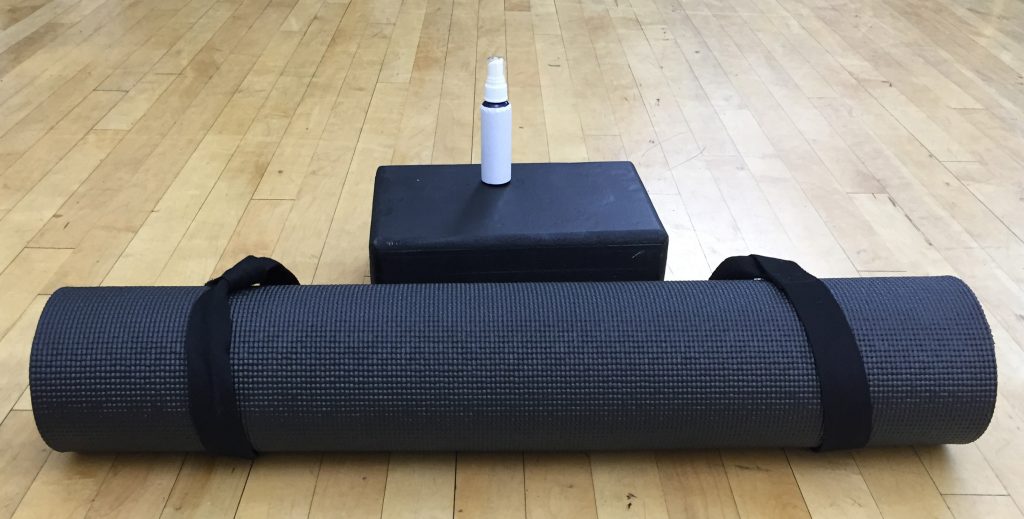 We received quick approval and encouraging words from the folks at Kickstarter.  We are going to push the button and launch officially at 11AM on Tuesday, June 28th.  This will give us a little bit of time to get our marketing materials in place and to let a few members of the press know about our project in advance.  Please be patient, a yoga mat that is your size and fits your budget is coming very soon! 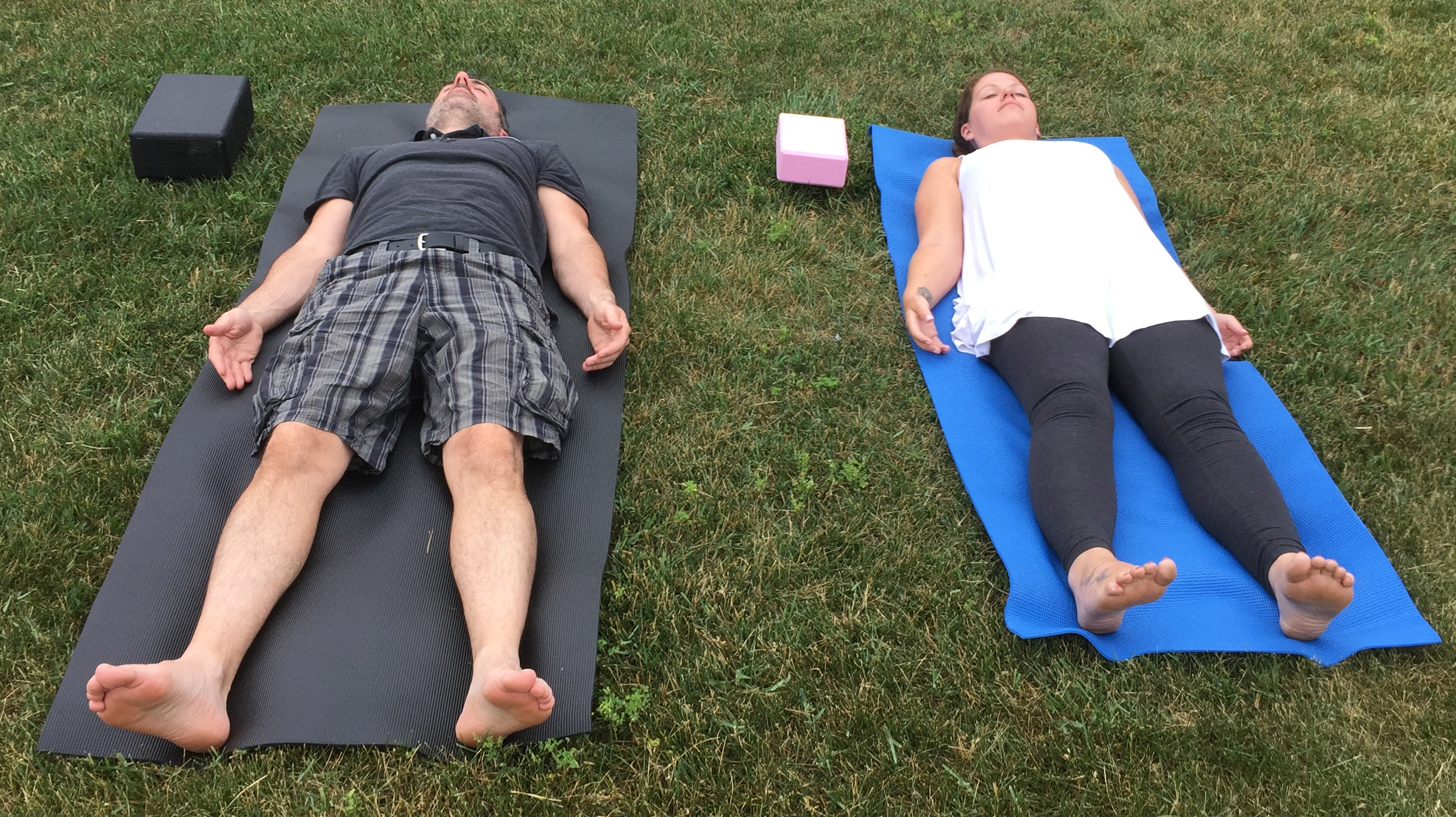 Different size people should have different sized mats.  Here are two people with two different mats.  On the left, is a 6′ tall man with a Yeoman mat and on the right is at 5’3″ woman with a standard mat.

We are currently putting together a Kickstarter campaign for our Yoga Gear for Men.  Click Here for a sneak-peak at our Kickstarter video. 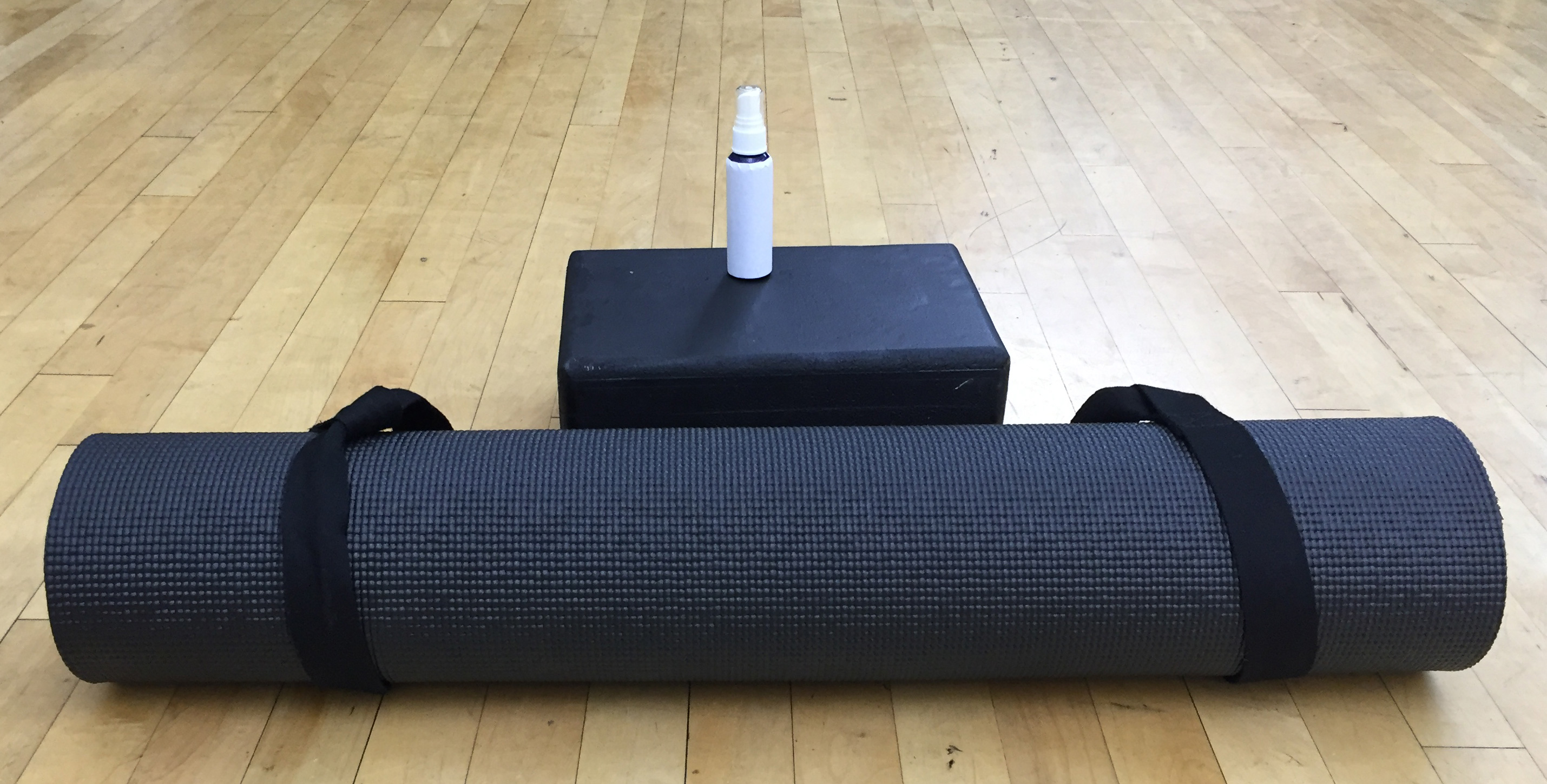 So, in creating this gear, the first thing I wanted to do was to make a larger yoga mat.  During a class, I break concentration a number of times to shift my body to stay on a standard size mat.  It is really just too small.  My toes our over the back on Cobra, my knees hang over the sides on child’s pose, and my face is on the bare floor during Chataranga.

So I built one.  It is just slightly larger, but the difference is amazing.  I’m never going back and you never will either.  It isn’t huge though.  No one has even notice it yet, so I don’t think I am imposing on anyone, I just have a mat that is the right size for me.

I am hopeful that I can find a way to bring it to you.

Last night at midnight, I finished some prototype blocks.  This morning I brought them to Yoga class. It isn’t typical for one person to show up with 4 yoga blocks, so people in the class were curious.

One friend immediately understood what they were.  They are larger than a typical block and when I gave them out, people immediately wanted to use them for seated posture.  I did too.  My hamstrings are too tight to straighten my back in seated posture, so sitting on a block helps me stretch my hamstrings without straining my lower back.  Typical blocks are terrible for someone my size, by our prototype blocks were great.  I’m confident that they won’t be too expensive either.